This project is a great example of optimizing information architecture, and also "UX'ing" the language, images, and features to guide and delight the user.

OpenJustice is part of the Open Data Movement for Transparency in Government. It’s an incredible resource but the feedback the client has been getting is it’s not user-friendly enough. And for us, as UX designers, the site presents some special challenges. How do we make data come alive for all the different types of users who use data in all different ways? The site has to work for data scientists, academics, journalists, police officers, laypeople. It has data stories to browse but also interactive tools for fact-finding missions and raw data for downloading. We had to think of ways to help people understand how the site works.

And there’s another special challenge to this project - it’s a government site, so even though we’re talking about the same things politicians talk about - deaths in custody, police officer shootings, race, guns--we have to keep a neutral tone. We have to figure out how to sell without emotion, how to show the WHAT without the WHY. 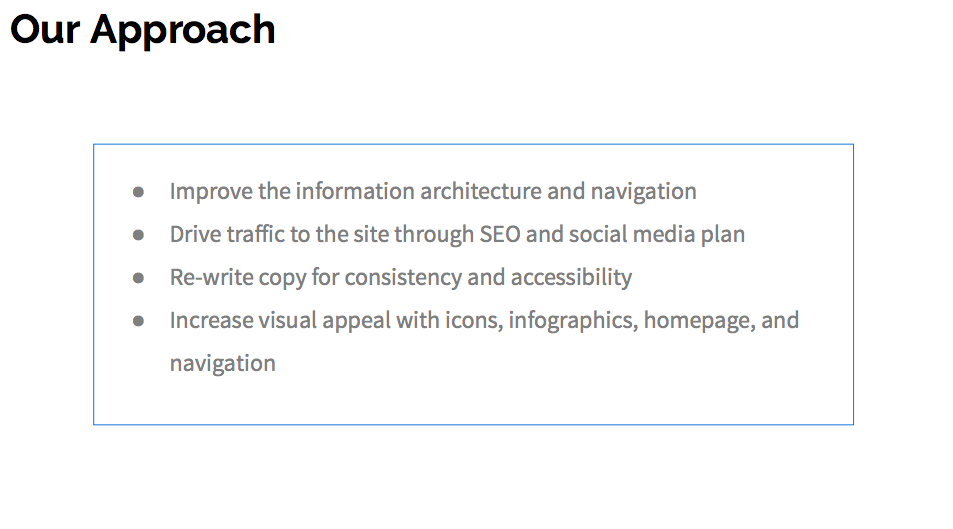 In the Exploration phase, the first thing I did was drive to Richmond to user-test the site on regular folks. The pain points quickly became apparent. They were curious at first, but quickly grew frustrated. At the Home page, they didn’t know what their options were, and got more confused as they clicked around. One user said the site seemed “almost designed to keep me out.” We also discovered that the site is not very mobile-responsive: Some of the navigation actually disappeared! 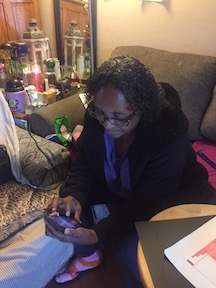 Next, I looked at OpenJustice’s Google Analytics. These were my key insights:

If we don’t pay attention to driving up traffic, it really doesn’t matter how good our other UX enhancements are. 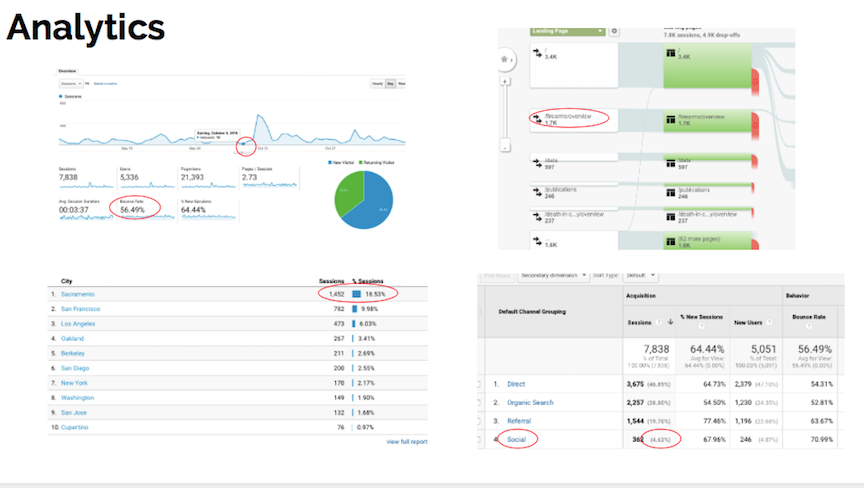 In our Research, we looked for patterns we could follow on other goverment data sites. One trend is to make a Search bar the mean feature of the Home page, but our site doesn’t even have a Search function!

Our UX team did a thorough Heuristic Analysis of the existing site. The use of language on the site was more a barrier than an aid. I started planning how I would sharpen the language to guide the visitor through the site, and give it a more human feel. 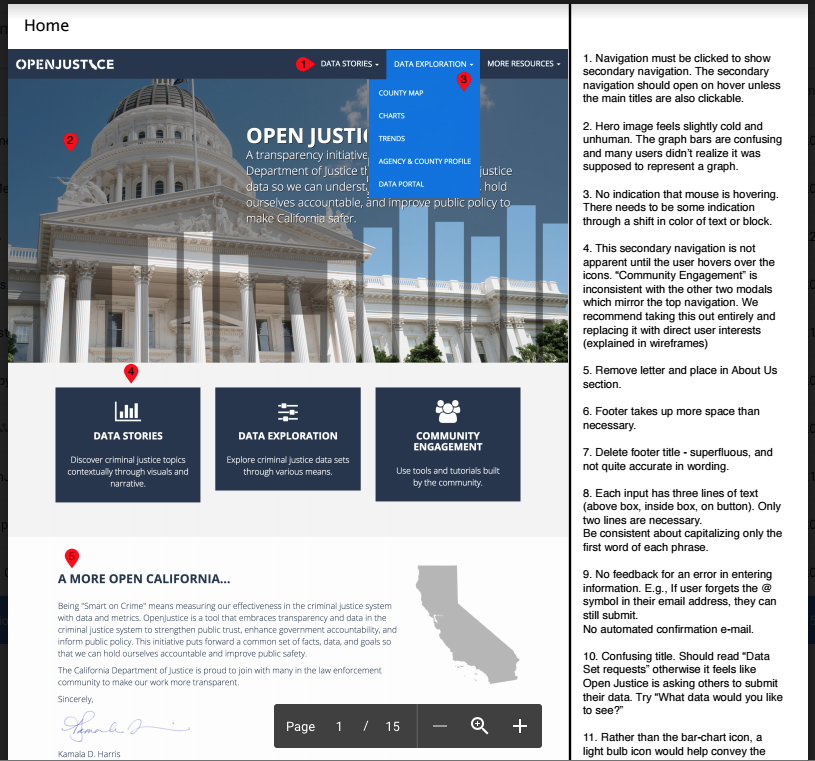 We took a road trip to meet with the entire team of developers at the California Department of Justice in Sacramento. We were really glad we got these stakeholders involved before our Planning phase, because they were eager to make certain improvements, but we needed to understand their special limitations. For one thing, it is truly a juggling act bringing together data from 1,000 agencies, and keeping the tone apolitical. We heard their priorities and got their take on our early ideas. 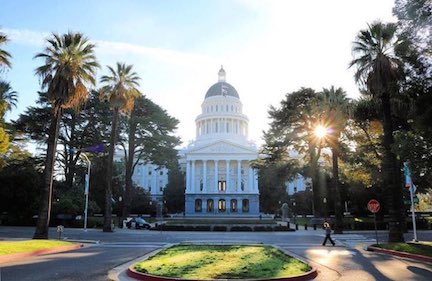 We were realizing Navigation needed to be a big focus. We wanted users to know where they are and how to get back to where they came from. So we Not only was the Nav disappearing on Mobile, it was confusing and quirky on the desktop version. We created a Site Map and added tabs and seamless access to secondary navigation. We also added a Tertiary navigation bar showing other options on that level to the user visiting a certain category. And the developers said they could add a Search bar! 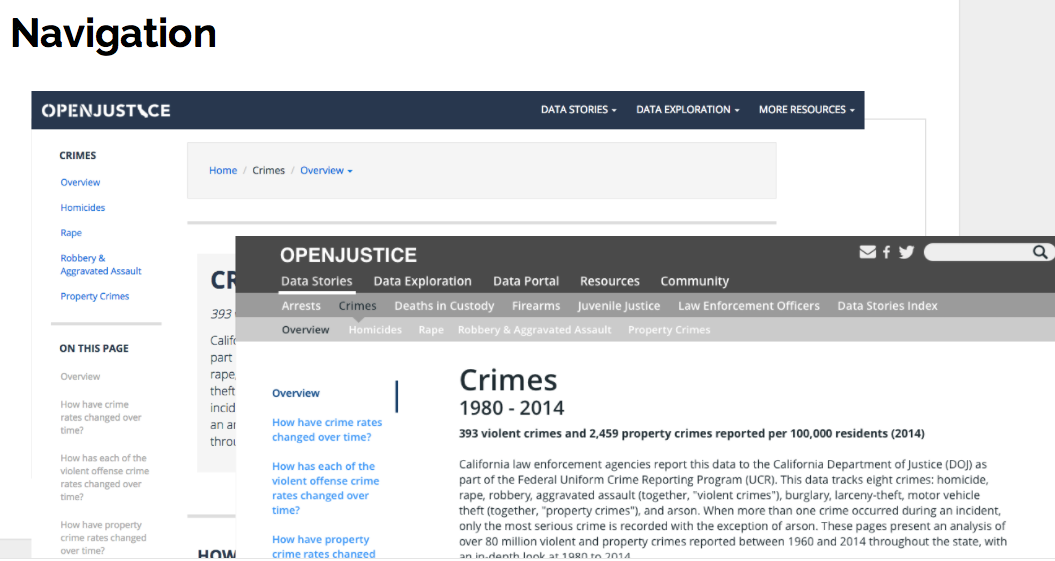 From my background a journalist, I am a big believer in a strong lead and a catchy front cover. With the site’s high bounce rate, we wanted to give the users--all the different kinds of users--intriguing things to grab onto right away. The current home page had a lot of rather wasted space. Our team created a clickable menu with the look of an infographic that would make the offerings utterly clear to the various users. We wanted the home page to feel current and newsy, so we created another menu to draw them into the categories, but this menu felt more like news headlines. We never want to sound sensational when talking about sensitive topics like police officer shootings or deaths in custody. We felt the least provocative way to surface these really interesting nuggets would be to keep them in question form. So the “headlines” of our “news” section would be, for example, “Which race/ethnicity is the most arrested?” We also got signoff from the Deputy Advisor to the Attorney General that we could add the OpenJustice Twitter feed! 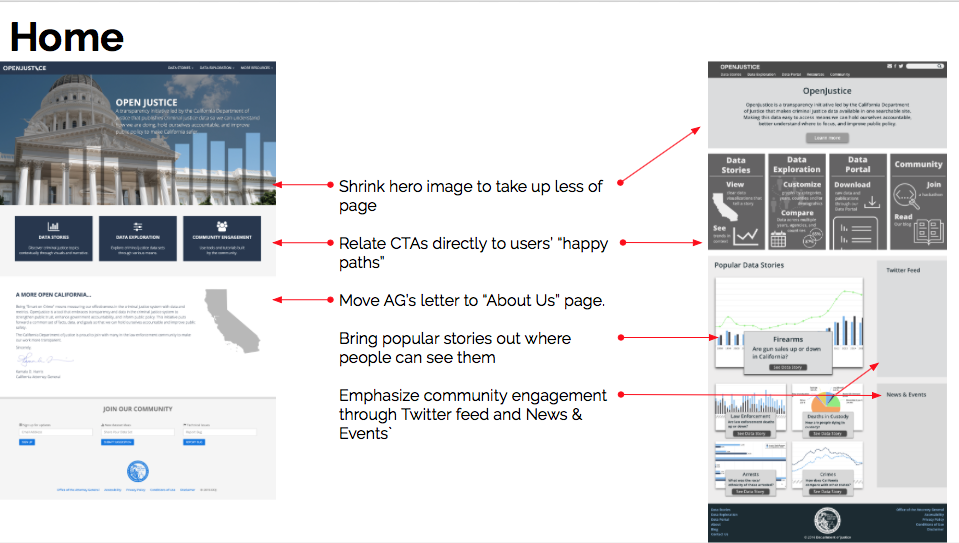 We turned a sort of “leftovers” page into “Community” as a way to get people to understand that open data is available to them for downloading should they wish to use it in their own useful applications. This page is also a place to share their creations and check out what other users have made. One of the great things about the Open Data Movement in Government is that economy and efficiency come from sharing and collaborating. 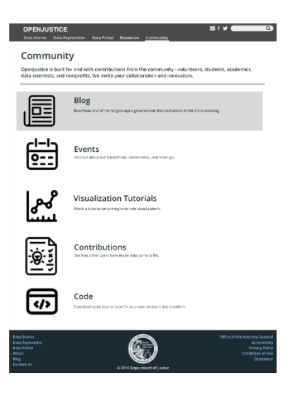 We also made the site more responsive for Mobile. 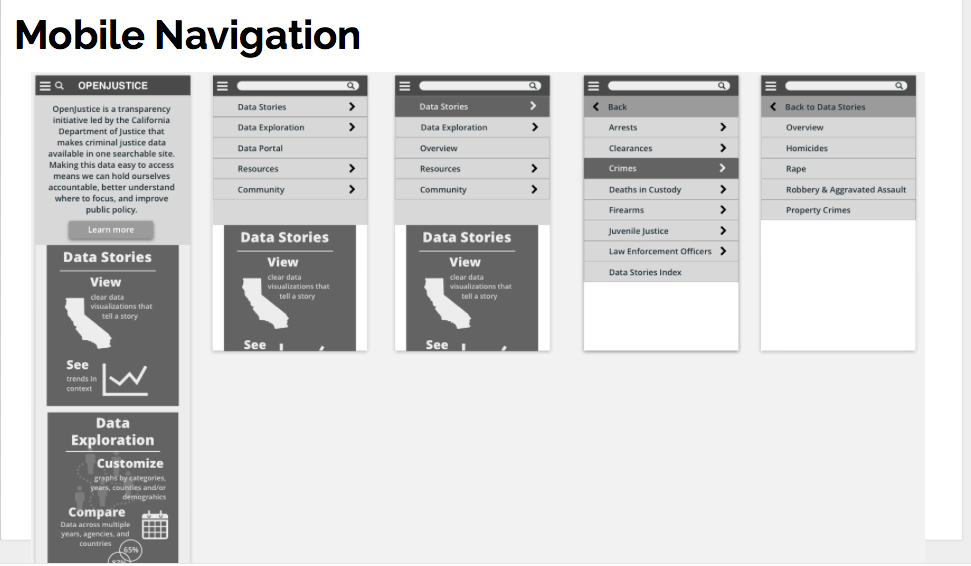 The content on the site was sounding very government-y. I wanted to keep it authoritative but more like you had a person next to you saying “This is what we have, this is how you do it, and this is how it’s worthwhile.” So I rewrote most of the content on the site to make it more succinct and more human. Language is as important as structure in guiding and keeping the user. Sometimes, just changing a category name can change the whole user experience. 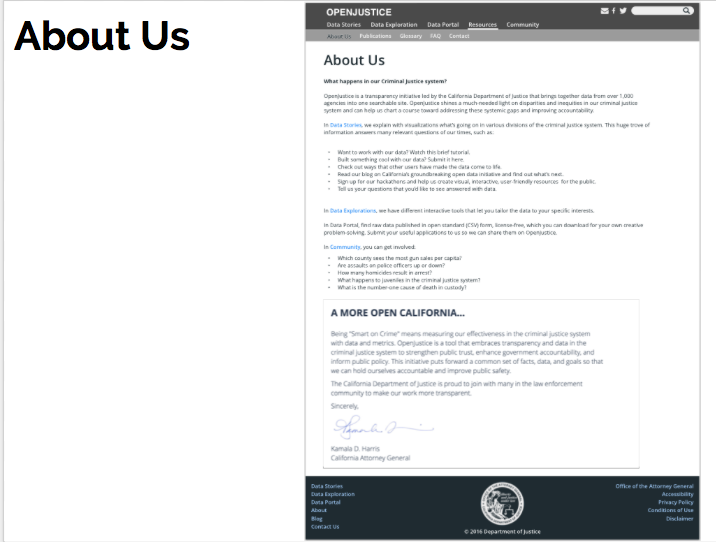 And because Promotion is UX, too, I created for the client a 5-Step Social Media Plan: 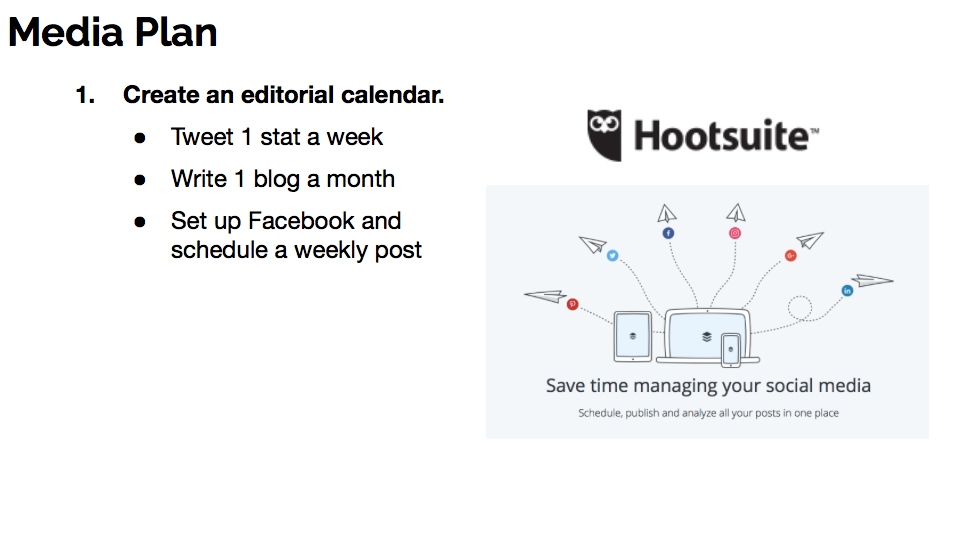 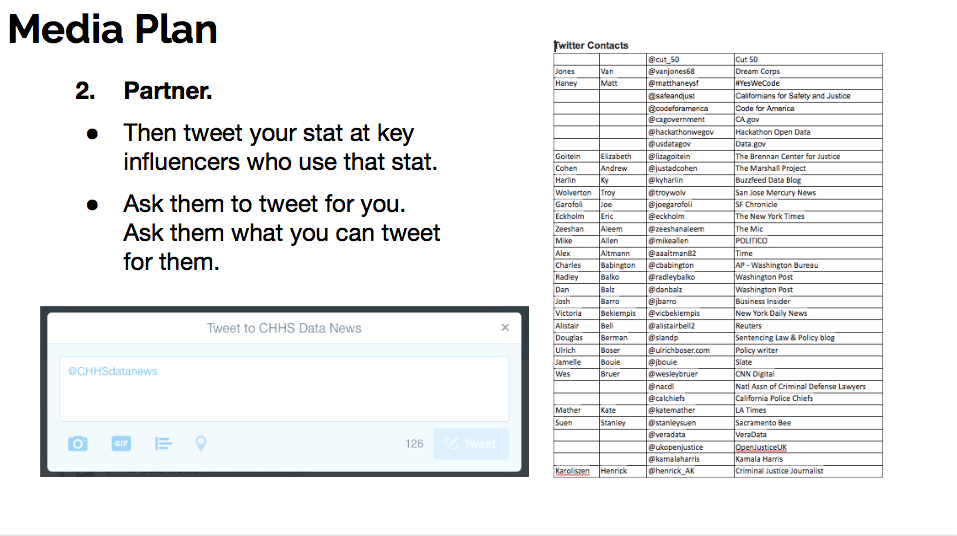 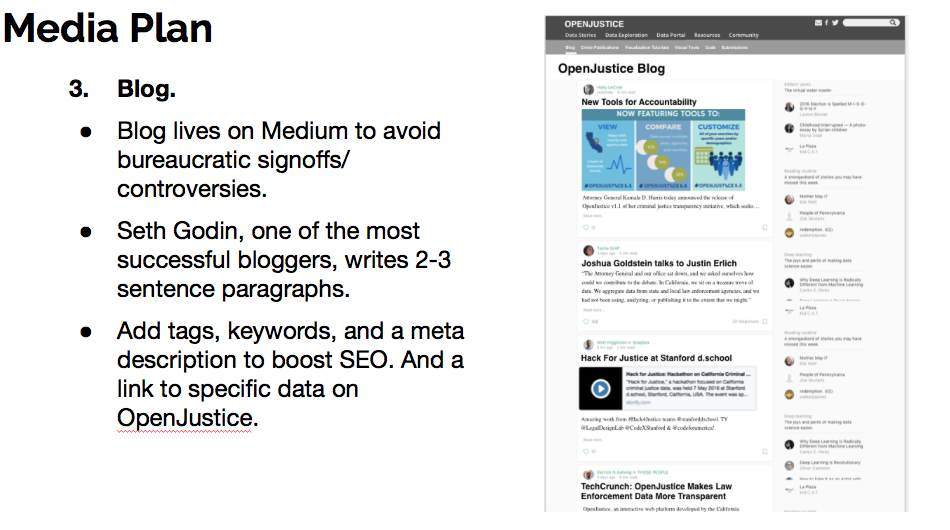 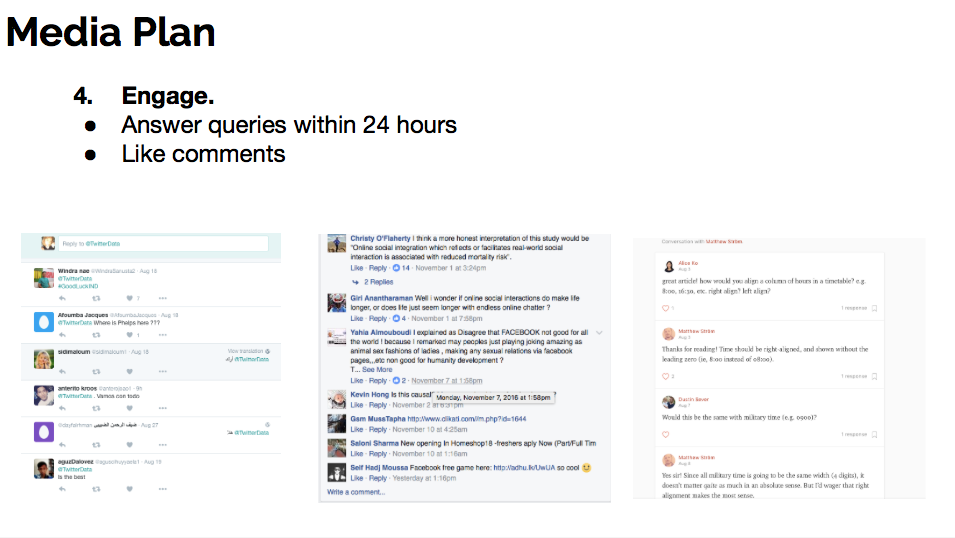 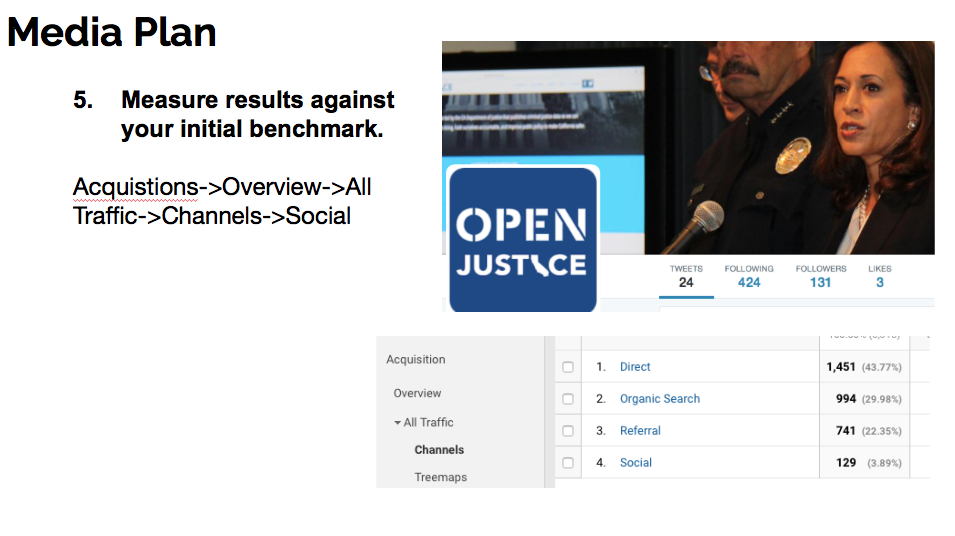 The client said, “I think I can speak for the team when I say we really appreciate your attention to detail and all the work you’ve put into improving the site.” We were asked to continue. Our project is ongoing for Attorney General Kamala Harris and The California Department of Justice.